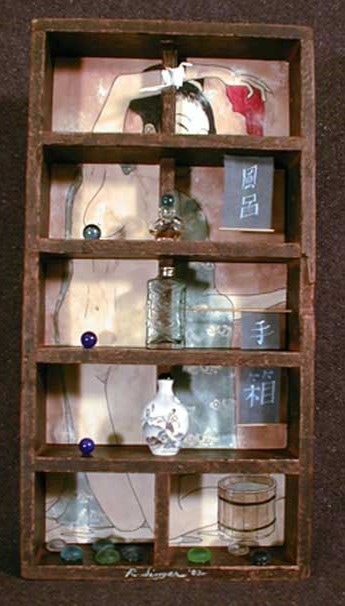 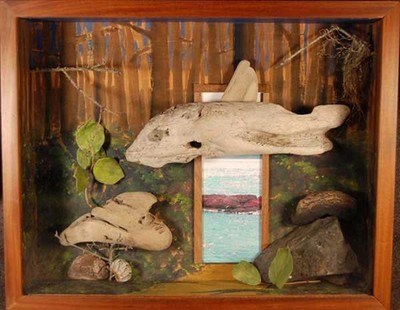 Richard's latest series is "The Live Sea Scrolls", long narrow scrolls painted on raw canvas. Untreated canvas presents some problems which he finds interesting to solve (it bleeds beautifully, but is very hard to get fluid brushstrokes). "I love the learning process", says Richard. "I like to include some ancient writings I've come across. Often I don't understand them, but they seem strongly expressive and attractive." He still sometimes uses his hand-made brushes to make "interesting marks" on some paintings. He takes some time to prepare the paper or canvas, then very quickly executes the image, sumi-style. He may then add photo-images or additional painted images to the work. He feels it is the closest he has been to converting his own energy directly to a painting.

The "Island Boxes" are an ongoing series. They allow Richard to use ALL the media, 2D and 3D, plus the bonus of browsing any available antique or junk shops, looking for old boxes and strange, evocative objects. He can create a mysterious, concise statement –a little world- inside of a box.

"Being an artist has been a lucky, lucky part of my life", says Richard. "It's the most free I can imagine being. I learn from my granddaughter, who said when she was 3- 'I HAVE to paint!' I hope I can keep that kind of drive."
​
Richard's website